October 06, 2019
A couple of years ago when I started my Instgram account I typed in the word, "yoga" and the person who popped up was Rachel Brathen, aka Yoga_Girl.

Of course the first thing I noticed were all the amazing pictures of her doing yoga in Aruba with deep blue skies, clear blue water, and that incredible white sandy beach.

I can assume that I am not the only human who day dreams any chance they can get of experiencing a life outside of their own, even if simply visually escaping for a swipe or two.

Then something interesting happened.
I started to like her.
I liked her views, her methodologies regarding yoga and the practice of.
I liked that she seemed down to earth and genuine.
Plus she said the word fuck.

It was her boldness and her ability to say what she wanted to say - say it - then accept and deal with the consequences - that sold me on the idea that I wanted to go to Aruba and practice at Island Yoga.

I was nearing the last semester of my Graduate program and had some left over financial aid, so I put down my deposit and made the decision to go.

I was taking a huge leap of faith and financial responsibility by going on that solo adventure, so I chalked it up as being a graduation gift to myself, from myself.

When I arrived at the studio, there were women from all over the world introducing themselves to everyone and then there was me. Trying to hide in the distance to watch and observe and hopefully not get noticed.

Except that didn't happen.

Rachel walked right up to me, introduced herself, and asked if she could give me a hug. Hugging her was like hugging someone I had known my entire life. I could feel the energy and love radiating from within as if it were transferring from herself to me like she knew that was exactly what I needed.

I could not help but become overwhelmed with emotion.
Emotion that was coming out of nowhere that I could feel welling up inside of me.
Emotion that was so intense, so strong, it felt as if it had been sitting there my entire life waiting for the opportunity to be released and let go.

We all went inside the studio and sat in a large circle. I could tell that I wasn't the only one who was nervous. I think we all were. Luckily Dennis (Rachel's husband) made us all laugh and eased the tension by being the only male in a packed room of about 52 women.

We started by going around the circle and introducing ourselves and sharing the reasons why each of us had traveled many hours (some of us days) all the way to Aruba just to practice yoga.

Some wanted to meet Rachel, understandably.
Some, had gone to be with their daughters or bring emotional support for friends.

Everyone was shedding light on personal situations in their lives, pouring out open and honest intentions, being very candid as to why they were there, and what they had hoped to achieve during our week of meditation and yoga practice.

When it was my turn, I completely froze.
I wanted to say so many things but the only thing that came out of my mouth was, "I don't know."

These women were sharing some incredibly deep and emotional scars and there I was with an, "I don't know."

I wanted all of that emotion that I was experiencing to leave my body.
I wanted to feel purposeful and have reason for taking that huge leap of faith.

Yet for some reason I hesitated, and I was unable to share my why.

It has been a year since that memorable trip, and now after reading Rachel's book, "To Love and Let Go," I want to finally share what I should have in that non-judgmental space full women who were there to support me.

What I wanted to let go of was everything.
Even myself.

More importantly, what I really wanted to let go of was my mother.

It was the final day of my 200 hour YTT and instead of attending class with a group of men and women that I had grown to love, celebrating our long successful journey with one another, I had gotten a call from my oldest sister that my mom had passed away.

Apparently from a prescription drug overdose.

My mom was not an addict by any means but she had dealt with deep depression and physical pain from an accident and talked about death and dying all the time.
She was obsessed with death to the point that she would mention it every time we spoke on the phone, or saw each other in person. She was so obsessed, she had her entire funeral already planned.

It was several months of long agonizing waiting after her death before any of us actually knew if she had taken her own life or not.
Still to this day I am not quite sure.

According to the final autopsy reports she had less than 5 mg of each barbiturate but because her doctor had prescribed so many of them (she was taking over 18 prescribed medications) it was the concoction, the mixture of taking them all together that ultimately resulted in her death.

On the airplane ride to her mountain home in California to say my last good-bye, I was reading a book by Tina Fey called "Bossy Pants." One of the things Tina wrote about was discussions she had with her girlfriends about the first time they knew that they had become a woman.

One friend said it was when she was whistled at by boys passing in a car.
Another said that it was when they had their first kiss or sexual experience.
Another, their period.

My answer? The day my mother died.

Her death was something that shook me to my core.

I loved my mother deeply, and outside of her amazing moments, she was also very cruel and mean. Maybe it was the drugs or maybe she was bipolar? I don't know. I just know that while she was alive, I never got  to make peace with her. I can honestly say that for a good portion of my life that I hated my mother. Hated her for abandoning me at 5, again at 10, and again when ultimately she died.

When I arrived in California, I couldn't go and say good-bye. I didn't want to see her lifeless body laying on a silver steel bed that was just rolled out of a closet encased with other lifeless souls waiting to be cremated or buried.
I couldn't see her that way.
I wanted to remember her in her good moments.

We buried her on the 4th of July almost a year later in our home town of Ririe, Idaho.
Her death was the most agonizing experience that lingered.
I felt as if I had no purpose.
It was if  my own personal identity had died with her.

My only mother was gone.
I would never hold her or smell her sweet Channel No.5 perfume, or hear her laugh, or yell.
Gone.

There is a passage that Rachel writes in Chapter four of Forgiveness.

"What we resist, persists."
"Whether it's pain, anxiety, fear, loss - whatever emotion you feel - don't fight it."
'Experience it."
"Feel it all."
"Lean into it."
"Surrender to it."
"Breathe into it fully."
"Open your arms wide and welcome it all."

This is me, letting go of you, my mother.

Not from my memory or from my thoughts of you.
But the crutch I used you as that held me back and together for so long.
The empathy, the neglect, the... I feel sorry for me attitude.
All in the name of you, mom.
I am sorry. I love you.

What I learned from that trip was this:

To Love and Let Go 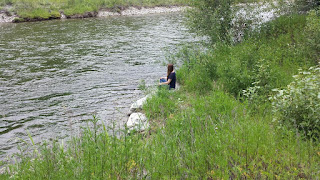 Popular posts from this blog

September 30, 2020
Why is it that when we imagine our perfect partner that when we finally meet them, it turns out that we are not the perfect partner for them - at all.  When do we know that delicate balance when it comes to matters of the heart and attracting the relationship that we desire?  I met my friend Moses almost a decade ago on one of those cheesy dating apps that was cool hip and fun at the time, but later discovered it was really just another way for men to get laid.  Moses is 5 years older than I am, fit and athletic, and likes to do the things that I like to do as far as physical activities. He is also incredibly sexy and very attractive. The downside about Moses is that he is seemingly a tortured soul, just like I am.  A free spirited black sheep that vies for attention because like most of us emotionally unavailable adults, was neglected as a child.   But that is the one thing that I love the most about him... Moses is wild spirit that can't be tamed.  Just. Like. Me.  Moses and I s
Post a Comment
Read more

November 03, 2019
It has been said that without failure, there is no growth. I can say that with all honesty there is some merit to that claim and there are moments from the past few months of my life that are completely unexplained; falling directly under the category of personal failure and growth. I have given the past three years of my life, the past three years of my time, money, energy, love, dedication, emotional support, failing health, and whatever else, to be thrown into a forced position to fit a mold that I tried desperately to escape since Jr. High and High School. Popularity. Unfortunately the career path that I had worked so diligently to pursue since 2011 had me as a "perpetually moving target swayed by the winds of polar politics" (Stowe 2019). In that, the power and influence were not judged by good work ethic and genuine action put forth to create improved results, but by "how well I played in the sand box with others" (Ellis 2019). The past three years
1 comment
Read more

March 10, 2020
Jowl: noun plural noun: jowls The lower part of a person's (or animal's) cheek, especially when it is fleshy or drooping. I am going to talk a little bit about age. Yeah, I know. Not fun. Especially if you are in your early, mid, or late 40's. You may not even like this topic in your 30's because you know eventually... it's coming. When I was a kid, I noticed that each of my aunts had them. The old lunch lady had them, and my grandma had them. At the time, I didn't really consider much of it and thought that maybe it was because they were all angry Irish women or that maybe there was something in the water of our super small rural town that was also causing families to have an over abundance of children. When I started to notice a little bit of face drag as of recent, I thought that maybe it was because I am always on my cell phone looking down or typing away important papers for school (again -looking down) or maybe along with "global warming&
Post a Comment
Read more

The Girlfriends' Guide to Forty